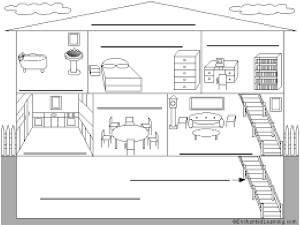 In my own house—the one I live in, I mean—I go into different rooms to do different things, according to the different needs of our household. I go into the kitchen to prepare food, and the dining room to eat it. I spend time with family and friends in the living room. I sleep in the bedroom. I wash clothes in the laundry room, etc.

On a daily basis, we come to God in prayer for a variety of reasons—to worship Him, to confess our sins and ask for forgiveness, to thank Him for His blessings, to ask for things for ourselves, and/or to pray for the needs of others—to name a few! Some different kinds of prayer (rooms in our house of prayer) might include:

The bottom line is: there are many rooms in our house of prayer!  We shouldn’t be camping out in one or two all the time, anymore than we would want to live in the kitchen and living room of our own home and never explore and use all the other rooms!

What rooms in your own house of prayer would you like to explore today?

By wisdom a house is built, and through understanding it is established; through knowledge its rooms are filled with rare and beautiful treasures. (Prov. 24:3-4, NIV)

One thought on “Building Your House of Prayer, Part 4: Rooms”