My next few posts will be on location from the United Kingdom, where I have the delightful privilege of spending the better part of August . . .

All Saints’ Church in Dummer, UK

I pulled up the latch on the worn, wooden gate and slipped inside the old churchyard. Passing on my urge to stop by the weather-beaten gravestones out of morbid curiosity about who lay beneath them, I opened the large door to the church itself. As I entered, I could immediately smell . . . age.

I was here to get a small glimpse of Church history, so I drank in the sight of the neat rows of wooden pews—who knows how many seats have warmed those benches through the centuries? 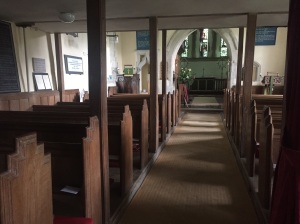 Signs posted around the room note the different improvements made over the years: a priest’s door, with some original paint, from medieval times. Additional features added in the 1500s and 1600s. Names honoring patrons in the congregation, posted on the walls in the 1800s (names that are also mentioned in Jane Austen’s diaries! Jane was born and grew up around here.) Sober memorials to church members who gave their lives in service to their country during the Great Wars of the 20th century.

The pulpit, unassuming at first glance, is special not because of its architecture but because of  a) its age (built in 1380) and b) who has preached in it—George Whitefield, specifically—the great British revival preacher who helped launch the Great Awakening in England and America, along with John and Charles Wesley, in the 1730s and 1740s. I have to admit, I was hoping some seeds of that anointing might somehow be lingering . . . contagious, perhaps? Lord, we need a little of that revival spirit.

I can’t say that I actually felt anything (other than awe), but I did relish having the whole chapel to myself and some time with the Lord, one on one, in that historical place, asking Him to speak to me about revival and about . . . me. I thought of Psalm 26:2, which says, “Put me on trial, Lord, and cross-examine me. Test my motives and my heart.” And Psalm 139:23, “Search me, O God, and know my heart; test me and know my anxious thoughts.” If we’re interceding for revival, I believe this is where we need to start. I need to ask God to speak to me about me before I can go any further than that. So that’s where I started.

Asking God to speak to me about me provides a refreshing opportunity for me to experience love, affirmation, and personal instruction from my Father and Friend. After all, it is my position as His beloved child and friend that affords me the privilege of approaching Him in prayer in the first place (see Luke 11:12-13).

David said in Psalm 27:8, “My heart has heard you say, ‘Come and talk with me.’ And my heart responds, ‘Lord, I am coming’” (NLT). David was responding to an open invitation to sit with God for awhile, and converse with Him. Like David, we all need to spend that time with Him, to listen to God for ourselves regularly.

Granted, we won’t always be able to do it in an old historic church that echoes with lingering spiritual reverberations of anointed revival preachers. But I have to say, getting to do it there was pretty cool . . . 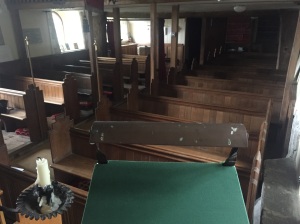 4 thoughts on “An Invitation to Sit with God”